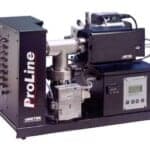 The biotechnology industry has expanded rapidly over the past five years with growth rates consistently above 15%. The growth has been fueled by the increasing use in therapeutics of large molecules based on fermentation
rather than the more traditional synthesis of small molecules. This has placed greater demands for quality control on all aspects of the product development and production processes, not least on the key stages of cell culture fermentation.

Ametek quadrupole mass spectrometers can measure and report the four major air gas components (N, O2, Ar and CO2) in as little as two seconds. Therefore, multiple reactors can be monitored with a single instrument. Even allowing for stream switching and settling times, the analyzer can measure the RQ within 10 to 20 seconds per fermentor. Air feeds and off gases are monitored with one instrument allowing concentration data to be compared and cataloged easily and more accurately.

Mass spectrometry ’s wide dynamic range allows accurate measurement of gas species from ppm to percentage levels. Other techniques require multi-point calibrations to cover the component ranges that are found in the analysis. In some cases they even require different analyzers such as when measuring around 300ppm carbon dioxide in air feed, or percentage levels of carbon dioxide in the off-gas.

The mass spectrometer not only measures the respiratory gases but also nitrogen and argon. We can use this to eliminate the flow measurement. For most standard fermentation, nitrogen is neither consumed nor produced by the process.